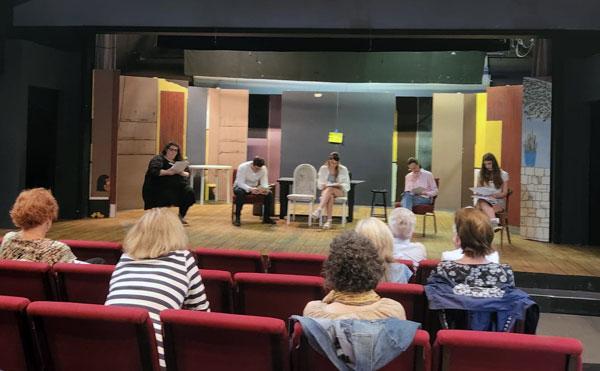 The play to be read is “Affinity” by Charles LaBorde.

“Affinity” tells of the early years of the career of celebrated architect, Frank Lloyd Wright, including the beginnings of his growth to fame, his first marriage, his trials as he became a famous designer of homes, and the dissolution of his marriage after beginning an affair with one of his clients.

The play begins in 1937 with the construction of Taliesin West in Arizona and then retells the years from 1888 until the events of 1914 that led to the destruction of the first Taliesin in Wisconsin.

Charles LaBorde has been an actor, director, designer, and playwright, as well as an arts educator and administrator throughout his lifetime. He holds a Ph.D. from The Ohio State University in theatre and doctoral certification in educational administration from the University of North Carolina. He was the founder of the high school at Northwest School of the Arts in Charlotte, where he served as principal for 15 years until his retirement in 2008.

He has received 11 regional and state directing awards, a national directing award from the National Youth Theatre, and numerous awards for scenic, costume, lighting, and sound design from the North Carolina Theatre Conference. As a playwright he has received two national and four regional playwriting awards and has had his play, Memorial, performed in New York, across the nation, and in Europe. That play remains in print more than twenty-five years after its initial publication.

He is a full member of The Dramatists Guild, Inc.—the professional theatre association of playwrights, composers, and lyricists.

A short discussion will follow the reading to provide feedback to the playwright about the script. The reading will be held on the Hendersonville mainstage at 229 S. Washington Street, Hendersonville, NC.

There is no charge to attend or to participate, however donations are welcome and will be used to support HT.